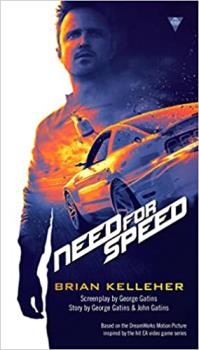 Tobey Marshall is a mechanic struggling to save his family-owned garage. While he and his team skillfully build and race muscle cars on the side, it’s not enough to keep the doors open. He reluctantly partners with his longtime rival, a wealthy, arrogant ex–professional racer, Dino Brewster. But just as a major sale to car broker Julia Bonet looks as though it will save Tobey’s business, a disastrous, unsanctioned race results in Dino framing Tobey for manslaughter. Two years later, Tobey is fresh out of prison and eager for revenge. To take Dino down, he plans to enter the high-stakes De Leon race—the biggest contest of underground racing in the world—to get the money to reclaim his family business and expose Dino’s deception. But getting there won’t be easy, as Tobey must run a high-octane, pedal-to-the-floor gauntlet, dodging cops coast to coast and dealing with fallout from a dangerous bounty on his car. Luckily, with his team—and the surprisingly resourceful Julia—on his side, he just might defy the odds . . .